A paradigmatic dissonance exists in the roleplaying game community regarding the most popular roleplaying game — Dungeons & Dragons. Consider the following quote from the blog Generic Universal Eggplant:

When you read a D&D book, your mind always concocts various situations, encounters, plotlines, or ways to weave something into the world. Then you realize that it’s all very gamified – as soon as you reach a certain level, hordes of orcs stop being a threat, taking on a dragon stops being an undertaking that requires careful planning and a lot of resources, various minor abilities become useless, and the world suddenly feels much less magical, evocative, and believable.

The dissonance to which I refer exists between gamers who profess a preference for sandbox campaigns and the popularity of Dungeons & Dragons.

Dungeons & Dragons — which employs a system that defines characters by levels, as opposed to skills — does not provide a sandbox experience, however, and it doesn’t set out to. D&D emulates the monomyth, or hero’s journey. The system doesn’t create a world you live in, but a narrative you play out. Characters don’t go back and fight those “hordes of orcs” for the same reason Luke Skywalker didn’t go back to the cantina on Tatooine and use his force powers on Jawas — doing so would result in anticlimax, which would distract from the narrative.

Games such as GURPS, Mythras, or Traveller do, however, create worlds that are lived in. Nevertheless, if you want to emulate a hero’s journey in a game like GURPS or World of Darkness, the Game master will need to incorporate some railroad tracks — which, looking at the popularity of D&D — might not be such a terrible thing.

As a games master, an assumption that the players’ characters behave as “heroes” has rooted itself in the gaming zeitgeist. However, not only does that need not be the case, but it may deviate from the origins of the hobby.

To put things in context, let’s consider some history. A lot of narrative on the topic of “Dragonlance” and its influence on tabletop gaming focuses on the “intriguing story intricately woven into the play itself” part of Tracy Hickman’s Nightventure requirements:

The first two of the four requirements that NIGHTVENTURE endeavored to meet – a player objective more worthwhile than simply pillaging and killing; an intriguing story that is intricately woven into the play itself – certainly can be seen as containing the seeds of what we now know as the “Hickman Revolution”.

Manifesto of the Hickman Revolution | The Mule Abides (wordpress.com)

Or, consider James Maliszewski’s comments on his blog Grognardia:

… the original Dragonlance modules were unique in that they presented not merely an entire campaign story arc — what we’d today probably call an Adventure Path — but, more importantly, it was an arc written for specific characters who had specific fates. Gamers love to bemoan “railroading,” but few adventures were as railroad-y as Dragonlance, a series whose every dramatic element was mapped out in advance.

GROGNARDIA: How Dragonlance Ruined Everything

However, the moral imperative “a player objective more worthwhile than simply pillaging and killing” raises my eyebrows more than the railroad. For me, this presents a shift in tone that influences the character of the game as much, if not more, than an overly plotted narrative.

In the now famous, “Appendix N,” creator Gary Gygax cited 28 authors who inspired Dungeons & Dragons. While J.R.R. Tolkien appears on the original list, he is outnumbered by writers noted for their contributions to what came to be known as sword and sorcery. Later, Gygax confessed some writers provided more influence than others:

Now consider the following excerpt from Howard’s Conan stories (underline my own):

Hither came Conan, the Cimmerian, black-haired, sullen-eyed, sword in hand, a thief, a reaver, a slayer, with gigantic melancholies and gigantic mirth, to tread the jeweled thrones of the Earth under his sandalled feet.” — The Nemedian Chronicles.

Or consider Fritz Leiber’s Fafhrd and the Grey Mouser traveling to the tower in the forest to pilfer its riches. 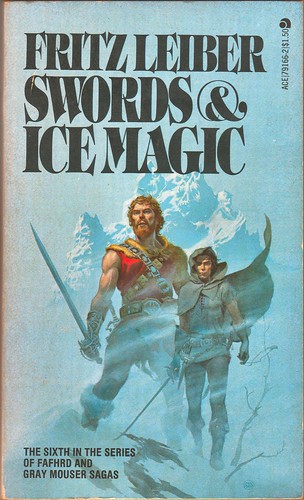 The fact emerges that much of the source material from which Gygax and Arneson drew inspiration followed the exploits of non-heroic protagonists. Couple this with the fact that both Conan and Fafhrd represent warriors from a barbarian north, and the connection with Vikings emerges.

From a gaming perspective, Viking PCs present distinct advantages. For instance, the “killing monsters and taking their stuff” phenomenon with which the Hickmans took issue doesn’t present a problem but a roleplay characteristic of the adventurers. Moreover, “dick-paladins” will not come around and spoil the party’s fun (and if they do, they will represent adversaries to overcome, rather than goody-goody nannies to endure).

But best of all, your Viking player characters will never pause the action to lawyer out how killing the trolls and taking their treasure will factor into a Rawlsian ethical paradigm.

Yesterday, in “Why Cthulhu Excels in Gaming” I touched on the topic of aversion to character death in science fiction and fantasy campaigns — a phenomenon I refer to as character coddling. Today, I stumbled on a topic via YouTube from The DM Lair that speaks further to the issue. It regards something called “The Hickman Revolution.”

In the clip below, Luke of The DM Lair says the following:

If you’ve played D&D long enough, you will have certainly noticed that with every subsequent edition of the game, it seems to get harder and harder to kill PCs. The game gets less and less lethal, and the PCs become more and more likely to live through the entire campaign. And with fifth edition as we currently have it, I can confidently say having DM’d the game for multiple groups for over half a decade, that it is nearly impossible to kill PCs. These game design decisions were, naturally, influenced by players who want the story and want to see their characters live through the entire campaign to see it all conclude.

I had never heard of “The Hickman Revolution,” or the notion that Tracy Hickman — co-creator of the Dungeons & Dragons “Dragonlance” series — deserved blame for controversial contemporary trends of the RPG industry, but the phenomenon of power bloat has existed for as long as I’ve played roleplaying games.

Luke explains that “The Hickman Revolution” has become a pejorative. The term refers to the following recommendations Hickman wrote in an adventure module titled “Pharaoh”:

So far, so good. Seems reasonable, right? So what’s the problem?

It stems from a sentiment among some players that narrative has overshadowed, or eclipsed, the original game. The argument runs like so:

As a result, campaign power level runs amok because the game focuses too much on the narrative and plot of characters who never die. The game no longer feels like Dungeons & Dragons.

The phenomenon culminates with game masters dissatisfied that they cannot challenge PCs who are too powerful and players who resent game masters “railroading” them through plot points (more on “railroading” and sandboxes in another post).

In general, D&D has become bloated and game masters do sometimes force players through plot hoops. Nevertheless, to attribute these problems to Tracy Hickman’s recommendations in “Pharaoh” remains preposterous. While I agree campaign story arcs become obscenely overblown (a trend that mirrors other forms of popular American entertainment), there’s no reason the original characters need endure to the end, aside from unsporting players who feel entitled to coddling.

The problem remains character death — the lack of it.

Bottom line — if you’re the game master, be the George R. R. Martin of game masters. Kill your players’ characters. Kill them early in the campaign — kill them often.

Remember, a game without the possibility of failure is not any kind of game at all — it’s a mutual admiration society.